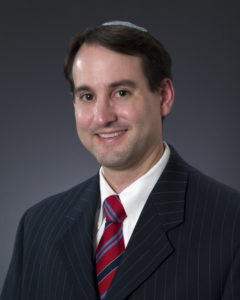 Rabbi Robert Haas, a native of McAllen, TX, received his B. S. from the University of Texas in Austin and became an elementary school teacher in Houston. Rabbi Haas then moved to Arad, Israel to participate in the W. U. J. S. Institute, before entering Hebrew Union College for rabbinical school, first in Jerusalem then in Los Angeles.

Rabbi Haas began his career as a rabbi in Dallas at Temple Shalom and at Congregation Emanu El in Houston, In 2012, after spending a year in Africa volunteering with American Jewish World Service, he moved to Savannah, Georgia to become the 14th spiritual leader of Congregation Mickve Israel. He is married to April and they have two beautiful children.